Yixing – The Pottery Capital of Jiangsu 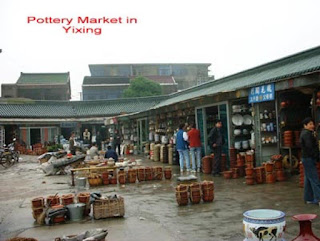 The first time I visited Yixing was in 1997. At that time Walter and I were still living in Shanghai. Being in charge of a large company, though very challenging and fulfilling, doesn’t leave a lot of time for the man in your life to do anything else but work. One or two rounds of golf at weekends constitute the essence of our free time. As far as my husband is concerned, visiting places within a short driving distance applies to someone else.

Like other expatriates living in China, we go to a neighboring country for R&R. In our case, it is to Phuket because we have our second home there. So when the long “International Labor Day” weekend came up, I could not believe it when my better half expressed a desire to go to Yixing, the pottery town he had heard so much about. Well… 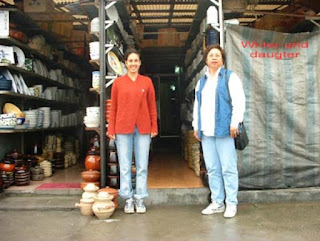 The first trip that my friends from Shanghai and I made in August of 1997 though very interesting, was rather strenuous. It took us more than four hours before we finally arrived at our destination. It was not so much the distance, as the trouble of getting there. First of all, the driver, through no fault of his, was not familiar with the road. He became lost while trying to find the right road, and we found ourselves going through the town of Kunshan and meandering around that area for ages. He had to stop now and again to ask passers by. At last a man on a motorcycle led the way to Yixing, having been promised a reward of ten Renmenbis. Even today, you will find these “scouts”.

By the time we got to Yixing, it was long past one o’clock. Needless to say, every one was famished and dying of thirst. Fortunately, we had the sense to bring along a packed lunch and some soft drinks. When visiting Yixing, please bring your own lunch. A visit to nature will need to be made behind a bush, as Yixing public washrooms are simply impossible…even in a hotel.

This time when Walter and I set off for Yixing on the Saturday morning of April 29, we were quite well prepared. Our driver had studied the map, and we didn’t have any difficulty finding the place. Nevertheless it still took us two hours and a half to get there from Suzhou. We drove through Wuxi, and the traffic was atrocious on that day. It looked as though all the trucks and cars in China were heading in the same direction. To make the matter worse, the road was bad and some sections were closed for repairs and others for extension. Clouds of dust rose up everywhere. Let’s hope that within a not too distant future, we will be able to travel the road in a much shorter time and with reasonable comfort. 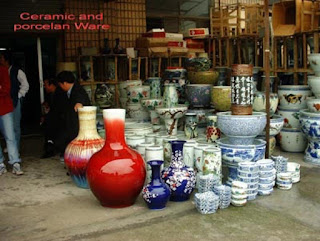 Located on the west bank of Lake Tai, Yixing is in southern Jiangsu Province. As we approached the town, we saw a number of tea plantations, dotted by bamboo groves and small lakes. The first thing we saw upon entering Yixing were street lamps mounted on iron T-bars, hanging in the middle of the street. They make rather an unusual sight…quite different from the ones you see in other cities. The road is lined with shops on both sides, displaying their goods. Ceramic and porcelain wares were stacked on vacant space outside. The place is a delight for garden lovers as it has many stone figures of various sizes and decorative styles available for sale. Huge stones usually seen in the classic Chinese gardens are available for purchase in abundance. 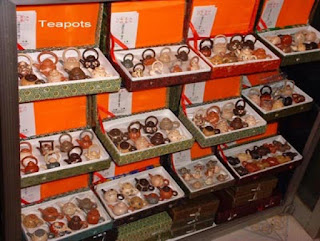 One place of interest is Dingshu or Dingshan, which lies out of the downtown area. It specializes in the production of glazed ceramics. Driving towards the area, you will see a variety of huge teapots on display along both sides of the road. We stopped at the marketsquare where various types of pottery were being sold. Most of them are still made by hand. When you are in the area, you should stop to see the craftsmen at work. We discovered that they are a delightful and friendly group of people. The colorful pottery you see in the shops in Shanghai is produced in Yixing, the best known of which is the purple sand, which comes in a multitude of delicate and graceful shapes. The price is reasonable, but you will have to bargain hard.

The Yixing traditional stoneware is made from reddish clay called “zisha” that is found in the area. Actually, there are three major “zisha” clay, the purple clay, red clay and dark green clay. This is usually unglazed and after frequent use and subsequent wiping, the teapots obtain a shiny color and show off their natural beauty. Most of the teapots here are made of “zisha” clay. But you will also find vases, pots and different ornaments.

Unglazed “zisha” teapots is believed to keep the color and the freshness of the tea better and for a longer period of time. This is because after firing, they maintain an appropriate amount of air holes for ventilation. The “”zisha” clay also has a very good elasticity, which allows them to be made in different shapes and forms. It is no wonder that Yixing “zisha” ware have won numerous prizes from international trade exhibitions all over the world.

The art of making Yixing pottery can be traced as far back as the early Song and Ming Dynasty (around 960 – 1505 AD). It flourished during the Ming Dynasty. During this time, a change occurred in the way the tea was made. People started to drink a tea, which was similar to modern tea – made from young leaves from tea trees.

“Zisha” teapots have the ideal characteristics. Can you wonder, therefore, that Chinese scholars have found true beauty…both in the rustic elegance and the natural shine of the unglazed “zisha” teapots?