From Guangzhou to Guilin 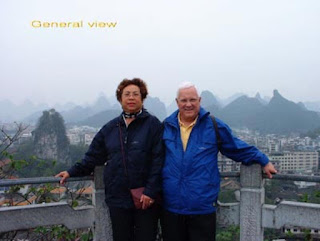 Mention Guangzhou and one conjures up an image of a fast pace of life in a city where people are busy with business all the time. Since Guangdong is the cutting edge of the China’s reform, its capital city, Guangzhou, is a beehive of activities – with people always rushing somewhere. “Time is precious and even gold cannot buy time” is a popular Cantonese saying. As a result, the citizens of this province are richer and have money to spend and eat out more than elsewhere. It’s therefore no wonder that Guangzhou abounds with restaurants and teahouses. People here have a custom of drinking tea with dim sum in their leisure time or at business meetings.

It is well known among gourmets throughout the world that Cantonese cuisine is one of the best, if not the best in China. In my view, Cantonese cuisine is the epitome of all Chinese dishes. It’s delicious and satisfying the taste buds. The cooking style is a mixture of tradition and modern, east and west. Cantonese dishes are often characterized with various unusual ingredients and materials that include seafood, weeds, flowers and others, unknown to this writer.

“It’s not always possible to translate Chinese menus because many of the ingredients are either unknown or unmentionable to Western barbarians”, a British magazine once commented on the Chinese dishes. So, if you want to enjoy authentic Cantonese food but don’t want to fly into Hong Kong, why not try one of the local restaurants in Guangzhou, a mere two-hour flight from Shanghai Pudong Airport.

Guangzhou Airport is reminiscent of Kai Tak Airport in Kowloon in the old days. Because of its location, planes have to fly so low that you can look into the apartment windows. Having checked in at China Hotel, now run by Marriott chain, we had lunch at a restaurant inside the hotel. The meal, consisting of clear chicken soup and shrimps with garlic, among other things, was excellent.

In the afternoon I visited the Ancestral Temple of the Chen Family, which has long been looked upon as the ultimate in Cantonese construction of the past glory. Situated in Zhongshan Qilu, the temple has a history of over a hundred years and is still in its original shape. It has survived many disasters, including the Cultural Revolution (1966-1976). During the Anti-Japanese War (1937-1945) a bomb was dropped in the shrine but fortunately, it did not explode. The exquisiteness of this priceless treasure can be seen from the buildings, which are made with a variety of sculptures of wood, stone and brick relieves modeled in pottery and lime, and frescoes and copper-iron castings in various styles. The carving technique is simple but eye catching and beautiful. The temple also functions as a museum, exhibiting folk arts and crafts, such as Guangdong ceramics, carvings, sculptures and embroideries.

The Mausoleum of Nanyue King, located just opposite China Hotel, was discovered only in 1983 and opened to public in 1988. It is the largest king’s tomb of the Western Han Dynasty (206 BC) ever found in south China. I was fascinated with the way the owner of the tomb was buried and wondered whether the “court people” had been instructed to do so. The king was dressed in a suit made of jade slabs sewn with gold thread, and buried with a gold seal and a lot of exquisite jade adornments. A silver box was also unearthed from the tomb. It is believed that it was imported from the ancient Persian Empire (Writer’s note: Iran today).

It was our 32nd wedding anniversary, so we invited some people to have dinner with us at East Ocean Seafood Restaurant, not very far from China Hotel. The waitresses were efficient without being obtrusive. One of the dishes we ordered was shark fin soup – rather pricey but worth every Swiss Franc spent. (I am not being paid to say this)! 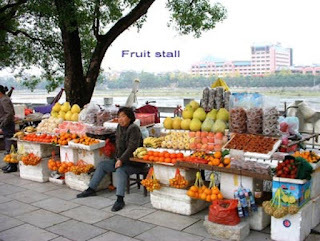 The flight from Guangzhou to Guilin was only one hour. Guilin’s surrounding of today is not quite the same as the one I saw of yesteryear. Its landscape, spoiled by the poorly constructed buildings, is an eyesore. The gray smoke, billowing from the factory chimneys along the airport highway, reminded me of Ulanbataar. Let’s hope that someone higher up will take note and act accordingly before the destruction is complete. However, a lot of progress has been made within the city itself. Looking out from the Sheraton Hotel window at night, I could see lights everywhere – a far cry from the darkness of the city a few years ago.

In the evening we went to the Dreamlike Theatre on Qixing Lu, which is supposed to be the only one of its kind existing in Asia. It’s a modern drama, put together by colors, stage, decorations, and performers’ skills, which consist of ballet and acrobatics. The show starts with a breath-taking scene of Beautiful Creation. The land cracks and the sky collapses and the plants dead. A “Green-Leaf” fairy descends from heaven and puts everything back in order while creating the mountains of Guilin. The second part is called Life and Eternity, showing flowers, insects, frogs, butterflies and bats. Female dancers are savoring the bounties bestowed by Mother Nature. The backdrop of the third scene is a serene river bottom that shows a life long journey followed by the scene of Oriental Charm and Dreamlike Li Jiang. I can’t believe I’ve written all of the above because it sounds so “kitchig”, but you’ll have to see it. 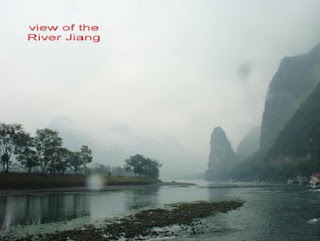 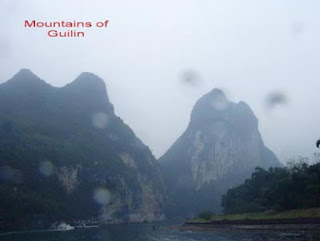 A cruise along the Li Jiang has been mentioned in one of the guidebooks as a tourist’s trap and expensive. That well may be. However, in my view, the cruise should be included in every one’s itinerary. Only by cruising along the river, can one truly appreciate the beauty of the magic mountains. After four hours and a half, we landed in Yangshuo, which is noted for its numerous hills of various shapes. My astonishment was complete. The village has changed beyond recognition. The narrow street, upon which typical Chinese shop houses are located, has been paved and extended as far as the parking lot some two kilometers away. 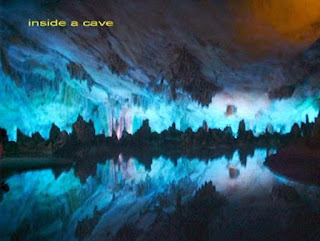 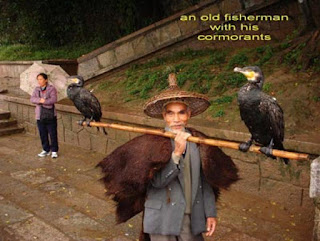 It no longer winds through the valley but through the so-called “Western Road” or Xi Lu that includes modern cafes, hotels and restaurants, offering “Western” menu. Before I could make up my mind whether to laugh or to cry, it started to rain. Not wanting to be caught in the heavy downpour, we paid RMB 10 for a ride in one of the electric cars, to take us to the parking lot about two kilometers away. One hour and a half later, we were safely back at the Sheraton.