Have You Been to Yangzhou? 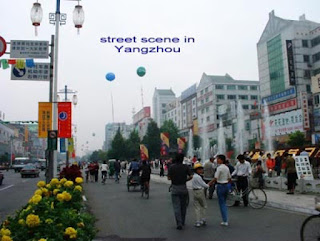 When H.E. Mr. Hui Liangyu, the Secretary of the Jiangsu Communist Party of China, kindly asked me the above question, I was reminded once again of how ignorant I still am of China. Although we have been living here for more than five years and have been to a number of places, my knowledge of the country leaves a lot to be desired. It dawns on me for the umpteenth time that no matter how long I have been in this vast and interesting land, I will never dare to claim myself an “old China hand”.

Since Yangzhou belongs to Jiangsu Province and is not very far from Suzhou, Walter and I decided to make it a day’s trip during the Chinese National Day holiday. We have heard about the town from our Chinese friends and acquaintances. They never fail to tell us time and time again that this little town should be on our “must see” list. They say that the town’s beauty is so renowned that one Chinese poet was inspired to write the following praise, “If there are but three bright moons in the world, two should definitely be in Yangzhou”

It came as a surprise to us that although the town is well known in China and is considered quite a treasure, it is often missed by many foreign visitors, who tend to bypass it in favor of other better known places like Hangzhou and Suzhou. This may be due to its location, which faces the Grand Canal to the east and the Yangtze River to the south. Before the bridge was built, people who wanted to go there traveled by train from Shanghai to Wuxi and then to Zhejiang where they crossed the river by a ferry. Since the construction of the bridge was completed some three years ago, Yangzhou is easily accessible by a good highway all the way from Shanghai.

A pavilion among flowers

After a two-hour drive, we arrived in the center of Yanghzhou. In the middle of the town, amidst the throng of heavy traffic stands a beautiful pavilion. Wenchang Pagoda (Pavilion)We learned from our guide that the Wenchang Pavilion was erected in honor of a “mandarin” scholar of the same name. 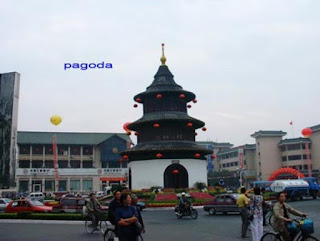 However, he could not elaborate any further, not being a qualified guide as such. He told us later that he was a banker, trying to earn some extra pocket money in his free time and to practice his English. Since our visit was at a short notice, we considered ourselves lucky to have him at all to navigate our driver around town without getting lost, if not for anything else. I was quite taken with the immaculately planted row upon row of colorful flowers that circled the pavilion. Wanting to capture this beautiful sight into my little camera, I had to cross the busy road to do so, at the risk of being struck down by one of those moving vehicles. Fortunately, my life has been spared to return home to tell you the tale. 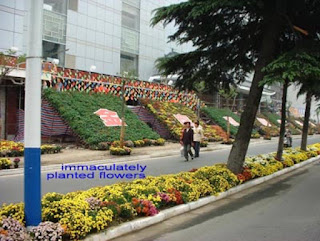 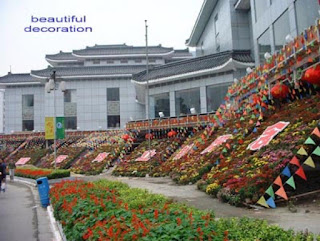 In keeping with the Chinese traditional style, the Yangzhou Municipality has somehow managed to bring the construction of the new buildings under control. The architecture of the newly constructed shop houses and department stores on both sides of Wenchang Zhong Lu, is reminiscent to that of the Chinese Buddhist temples with their flat roofs and curling eaves. To my eyes, they really look very attractive and in conformity to the expected Chinese architectural characteristics.

A dream of red mansions

At the entrance to the park area of the Slender West Lake, there is a signboard in Chinese and English, describing the Garden of He that consists of slab stone house built in early Qing dynasty and “Mansion of Hollering” in late Qing dynasty. The latter is of mixed eastern and western style, and many films have been produced here, such as “A Dream of Red Mansions”. In fact, on certain holidays, there is a special Red Mansion Feast held in the Red Mansion Dining Room at the Yangzhou Hotel.

We paid RMB 32 per person to enter the park area of the Slender West Lake that was shrouded in mist. Peach trees and weeping willows are planted on both banks of the lake – no doubt to give shade as well as for beauty. 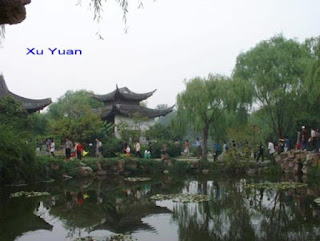 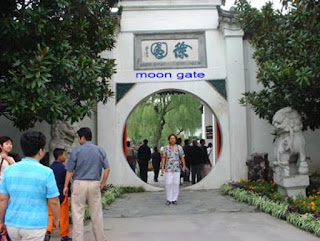 Strolling along the embankment, we stopped at the Xu Garden to admire the beautifully carved woodwork inside the pavilions. Xu Yuan, originally a temple and a private garden owned by a warlord, was established in Qing Dynasty in 1915. The script on the moon gate was written by a calligrapher from Yangzhou. 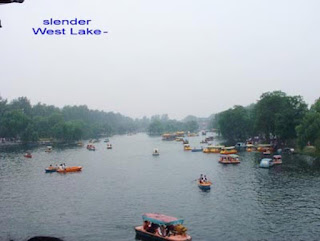 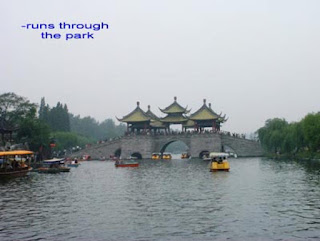 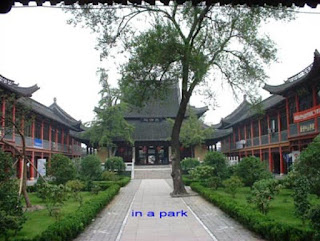 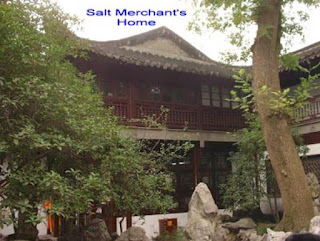 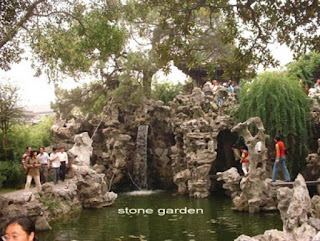 After lunch we went to Ge Yuan where attractive bamboo plants line a path that leads to the nineteenth century home, with a stone garden and maple trees, of a salt merchant.

At the Da Ming Temple, the burning of incense at the altar was in full swing. The sight was fascinating but the heat it produced was almost unbearable. 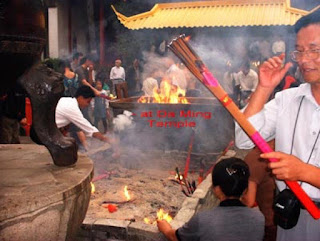 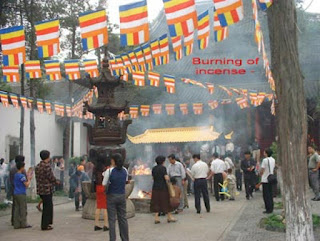 We retreated to the Jianzhen Memorial Hall, which was built in honor of Jianzhen, a native of Yangzhou, who lived between 688 to 763 AD. Jianzhen was a well-known Buddhist of laws and arts in the Tang Dynasty. He was a contributor in the history of Sino-Japanese cultural exchange. In 1963 which was the 1200th anniversary of his death, delegates from Chinese and Japanese Buddhist and cultural circles decided to build the hall in his memory. 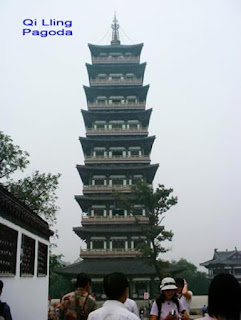 The nine-storied Qiling Pagoda on top of a hill can be seen from a distance. Built in 601 AD in the Tang dynasty, the pagoda contains some Buddhist relics. The three poets of the Tang dynasty, Li Bai, Liu Yuxi and Bai Juyi wrote some of their famous poems there.

It is said that in the early Yuan dynasty Marco Polo served as Mayor of Yangzhou for three years. The town is also well known for its arts and crafts such as paper cutting, which you can buy in story sets and apply as note cards, and the larger ones for framed pictures. Although the lacquerware is famous here, we did not have a chance to visit its factory. Well, there is always next time and when I meet Mr. Hui again, I will be able to reply to his question with “Yes, Your Excellency, I’ve already been to Yangzhou”.