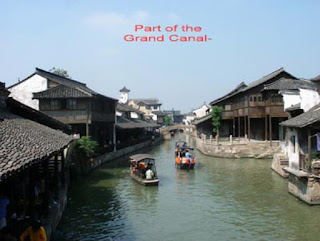 On a gray and rainy day, we set out on a day’s excursion to Wu Zhen, which is located in the north plain of Zhe Jiang Province, about two-hour drive from Suzhou. After passing the TV Tower, we drove on the road to Hangzhou in the direction of Wujiang and Pingwang, with the Grand Canal on our right. The dual road was well paved until we got to Shenze, a town well known for its silk. From then on, part of the road turned into a mass of slippery mud – especially after the rain, because it is being enlarged and construction has not yet been completed. We drove past Qinyun, Tonglua, Taoyuan to Tongxiang. Coming from Shanghai, you will have to use the Hu Hang Expressway to Hangzhou. About half way, the road branches off to Tongxiang, which lies in the direction of Wu Zhen. 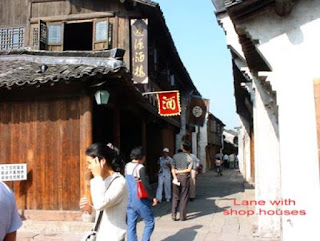 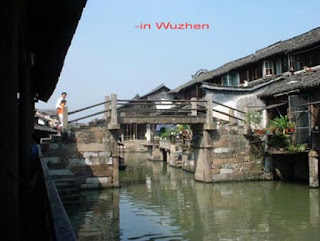 “Wu” in Mandarin means black. A house along a narrow alleyOne of the bridges that connect the two banks of the canalHouses on stilts - build half on land and half in waterWater ChambersWu Zhen is a water town like Zhozhuang, Luzhi and Tongli – but with a difference. Although the town is one thousand years old, it has managed to retain its original charm and flavor. Houses are made of cedar wood and stand along the narrow alleyways. 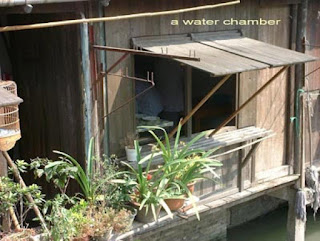 Crossing one of the bridges that connect the two banks of the canal, you will have a lovely view of houses on stilts – built half on land and half in water, because of lack of space – the Chinese call them “water chambers”.

To enter this town, which boasts of a thousand-year old history, you have to pay an entrance fee. The ticket booth is across the bridge, behind which a tall city gate stands. Its roof resembles that of a sacrificial altar with beautiful carvings.

Wu Zhen was opened to tourists only at the beginning of this year to permit foreign, as well as Chinese visitors, a glimpse into its ancient past and its diversified cultural heritage. While touring, it struck me that the place resembles a ghost town because the typical beehive atmosphere of an ordinary Chinese town is missing. It was very quiet even for Western standards. I inquired and was told that, at present, only the older generation lives here since the younger people have gone elsewhere to work. 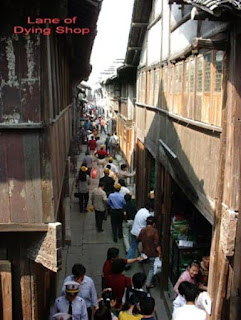 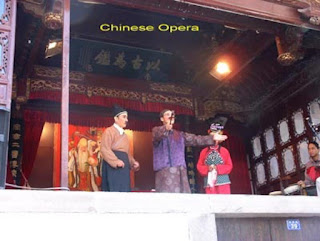 The residence of “Mao Dun”, one of the Chinese famous scholars and poets, is at the upper end of a narrow lane called “Lane of Dying Shop”.Lane of Dying Shop Chinese operaHe was born in 1896 and lived until the ripe old age of 85. The town square, with its long covered corridor with benches on each side, is neat and clean. It consists of a small opera stage where performances take place almost all day long. A small and simple Taoist temple stands at the opposite end. One noticeable feature is an abacus on its main gate. 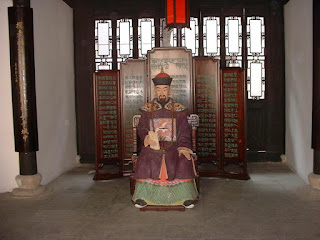 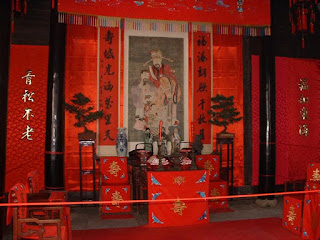 Walking through the temple, you will come upon an old residence that belonged to a high ranking official of the Qing Dynasty, named Xia Tong Shan. An imperial scholar, he was well known for his honesty, integrity and righteousness. Two red boxes containing scrolls – presented to him by the Emperor – hang above the door of his living room. A banner of four Chinese characters extolling his virtues is draped on the wall. The furniture in all the rooms is made of mahogany and of a simple Ming style. Two of his palanquins – one for summer and one for winter – are being exhibited in the main hall.

One of his noble qualities is related to a story that has been passed down from generation to generation – that of a young and beautiful girl called “Little Cabbage”, because of her fair complexion. She was accused of committing murder of the first degree. The twenty-eight officers appointed to conduct a trial had been bribed and were more than eager to pronounce her guilty.

However, Xia Tong Shan was not convinced and was able to prove her innocence, and she was set free. After the trial “Little Cabbage” was ordered by the court to stay at Xia Tong Shan’s residence for three months. The room above the courtyard in which she lived still exists. It is not clear to this writer why this particular story should be very important to the Chinese.

The embankment along the canal, upon which the walkways are built, is made of bricks. The wooden houses on stilts have tile roofs and the extended verandas are a permanent feature of each house. As houses are rather small and narrow, the verandas provide the inhabitants enough room to carry out their daily routine, such as making bean curd, drying out their fish or airing their clothes etc. 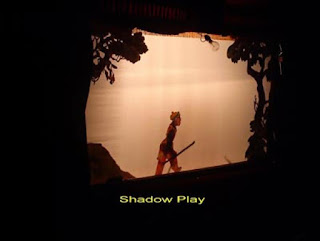 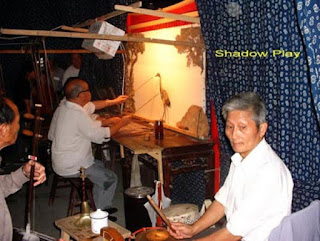 There is a small theater for shadow plays. Shadow theatreShadow play master sitting behind an illuminated screenThe figures in the play are made from animal’s hide, and are tied by a number of strings pulled by a show master sitting behind an illuminated screen. The audience sits or stands in front of the screen and looks through. I have seen the shadow play in other Southeastern Asian countries, but never in China. To my knowledge the shadow play originated from Indonesia and spread into countries like Thailand and Malaysia. 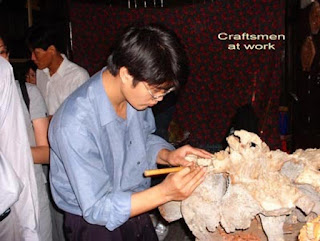 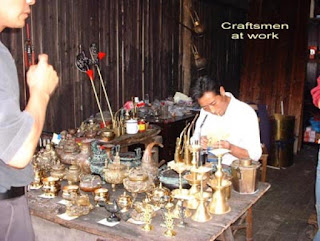 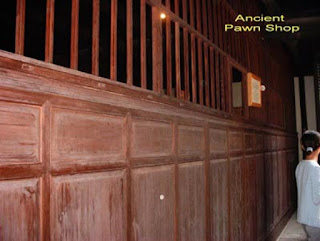 Many workshops abound. You can glimpse into an ancient pawnshop surrounded by high concrete walls. Craftsmen at workCraftsmen at workAncient pawnshop The counters, as well as the platforms behind, were built in such a way that the one who came to pawn, and the one doing transaction behind the counter could not see each other for security reasons, as well as to prevent the loss of face. The redemption period of any article was eighteen months per a specially designed tile calendar hanging on the wall. 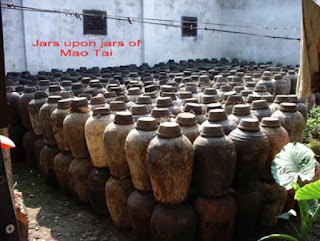 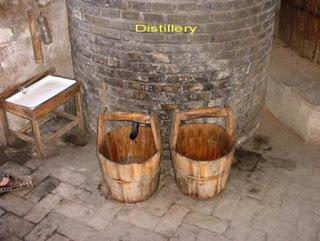 At the entrance to the rice wine brewery, there is a wine shop, opened in 1872. Jars upon jars of Mao-taiMao-tai distilleryA hanging gilded signboard advertises the sale of soya milk. The art of wine making is being demonstrated in the wine brewery. Its pungent smell exudes into the air. Even without sampling the stuff, you know that it is potent. A few blocks away there is a blue and white fabric workshop. 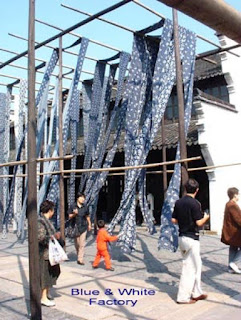 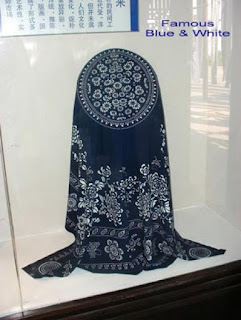 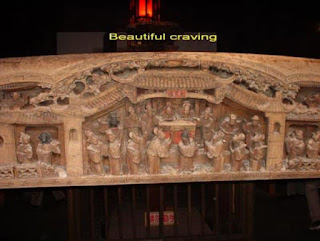 A showroom displaying a private collection of beautifully carved objects is located nearby. 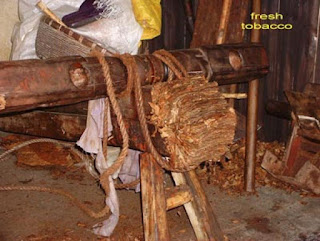 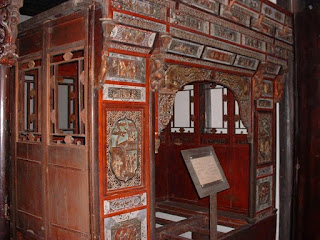 A tobacconist can be seen at work, slicing pile after pile of tightly packed tobacco leaves on his small but practical machine. Fresh tabaccoThe Jiangnan Hundred bed House MuseumThe Jiangnan Hundred Bed House has a collection of antique beds – not one hundred as the name implies but far less. I was fascinated with one bed in particular, as it is about three hundred years old, made of mahogany and dates back to Qing Dynasty. It is divided into two sections – one a small dressing area, as well as toilet facilities. The bed itself has about 106 figures carved on it. 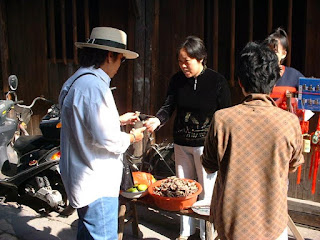 A number of small food stalls line the narrow lane immediately after the town square and are situated just in front of the two-storied restaurant “Shui Xing Guzhen”, where we had lunch. As we walked past, the stall owners beckoned us to stop in order to demonstrate to us the art of making steamed rice cake, which is a specialty in this town.