THE LANDMARK OF SUZHOU 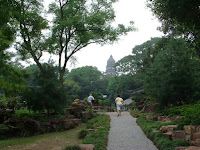 Most of you will have been to Suzhou. As you approach Exit No. 4 on the Huning Express Way, your attention will have been drawn to a tall leaning pagoda, looming in the mist on your left. Tiger Hill Pagoda is also known as Yunyan Temple Pagoda in Chinese and is the oldest of all the existing pagodas in Suzhou. Because of its historical value, the Pagoda was the first monument that came under the Chinese national preservation.

Standing majestically on the Tiger Hill or Haiyong Hill, the Pagoda has been Suzhou’s No. 1 scenic spot for centuries. The name “Haiyong Hill” is derived from the legend that the hill was once a reef in the ocean. In ancient times or even today, many Chinese believe that the tomb of King He Lu of Wu State of the Spring and Autumn Period (514 BC) was hidden in the hill on top of which stands this thousand-year old Pagoda. 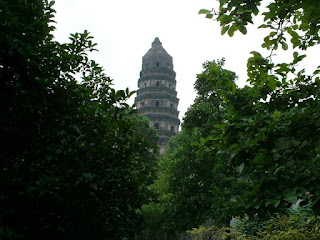 The Pagoda itself is about 58 meters high, including the base and theThe Tiger Hill Pagoda damaged spire. It was made of brick that imitates a wooden tower style and the shape is octagonal. A number of relics were found on the second and third floor during the time when the Pagoda was being repaired in 1956. Among them were the embroideries that became valuable objects for a research to be made on the history of Suzhou embroidery and its development.

In the meantime several repairs have been carried out to prevent the Pagoda from leaning farther to the northeast. Unfortunately, since its top has been tilted away from the center axis by about 2.3 meters and the northern base has sunk a great deal, no visitors are allowed to enter the Pagoda. One can only look at and take photographs from outside.

Tiger Hill is approximately 34 meters above ground level and lies in the northwest of the city. Actually, it is only a rocky mound that rises above the ground but what makes it interesting lies in the fact that almost every rock and pond in and around the area has its own story.

Another legend for Tiger Hill to be thus called tells of a white tiger found a few days after the burial of King He Lu. The Suzhounese themselves compare the shape of the hill with that of a tiger with the Pagoda as its tail and the entrance to the Hill to that of its head.

As you enter the compound, you will see a well believed to be the oldest among the 1500 wells that used to exist or are still existing in Suzhou. “Hanhan Spring” was named after a monk who used to carry water and fell on top of some overgrown moss. So he used his sword to dig the ground on the spot where he had fallen and spring water jutted out. However, when people saw him using the sword as a tool for digging, they jeered at him and called him a fool, which is equivalent to “Hanhan”.

There is a big rock with a crack called “the Sword Testing Rock”. The King of Wu loved swords and one time had asked a sword maker to test the sharpness of a sword for him. The man used a rock to test its blade and because the sword was so sharp, it caused a split in the rock that can still be seen today. Even the main thoroughfare in Suzhou is called “Gan Jiang Lu” to commemorate the legendary sword maker.

You will also come across the “Peach Stone” that tells of a monkey that had stolen a peach. While trying to escape, he dropped the peach on the stone. The “Pillow Stone” was dedicated to a monk called “Xi Gong” who was very good at his sermons but for some obscure reasons was banished from the court. During his sojourn around Tiger Hill, he used the stone as a pillow to sleep on.

The “Maiden Zhen’s Tomb” was dedicated to a beautiful prostitute who, after having given up her “profession”, had been asked by one of the scholars to spend a night with him. Zhen Niang refused and committed suicide in shame. Thus she earned great respect from all scholars in the area and they built her a tomb that has come to be known as “Zhen Niang or Maiden’s Tomb”. It is situated close to the “One Thousand Men Stone” which is said to have been King He Lu’s burial ground. The King’s son had all the men who had taken part in constructing the tomb killed in order to keep the place a secret.

A clever monk scattered small pebbles on a stone by pretending that they were “listeners” while he preached his sermons. So even the pebbles had to nod in admiration at his “shrewdness”. Hence there is an inscription in blue “Qian Ren Zhou” meaning “Nodding Stone” near the Lotus Pond. Before crossing the “Haiyong Bridge”, you will see big red Chinese characters, carved on a piece of stone that says “Tiger Hill”.

Underneath the bridge is the “Sword Pond”, so called because of its long narrow shape that looks like a sword. Standing on the arch-bridge, one feels as though one is looking down into a cavern. In 1957 a triangular tunnel was discovered that was used in ancient times to allow people to pass through but the officials did not want to open it. This tunnel resembles a passage to a tomb and therefore many locals believe that King He Lu’s tomb is situated here.

Directly under the Pagoda there are two deep wells served as mirrors by the King’s concubines as well as by the monks for fetching water. You will have to walk to the backyard to have a clear view of the leaning.

Through the window of the Villa of Ten Thousands Scenes you will be able to take some beautiful photographs of the scenery. At the southeastern foot of Tiger Hill is a bonsai garden that has old tree trunks of different shapes and sizes. The most striking one is the 400-year old giant sparrow plum “Quemei”. This typical Suzhou bonsai garden is indeed well worth a visit.

If you have already been to Tiger Hill but have not discovered all of these things, then do visit the place again – you will not be disappointed, especially if you come in spring. From beginning of April until June there is a beautiful flower exhibition that will take your breath away. The place abounds with lovely flowers of all colors such as carnations, narcissus, daffodils, tulips and a lot more. If that is not enough, you still can do your shopping around the area. The surrounding abounds with all the souvenirs that will surely make a large hole in your purse.