DAZU and the Chang jiang 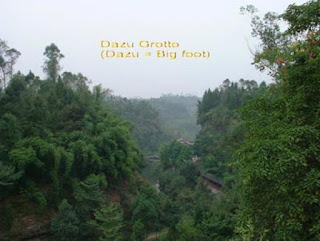 Having arrived in the thirty two million city of Chongqing two days before boarding “Princess Jeannie”, we decided to make a day’s excursion to Dazu, which lies between Chongqing and Chengdu. Since the Chengyu expressway does not lead directly to Dazu, we had to travel on the small and winding road so it took more than two hours to cover a distance of 168 km. Dazu (meaning big foot) is famous for its stone carvings. Despite their age, the carvings are in a good state of repair due, in part, to an ingenious system of internal drainage and their relative isolation. UNESCO declared it world cultural heritage site in 1999. 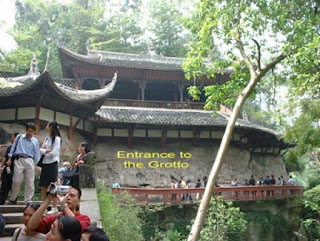 There are two main groups of sculptures – Beishan (North Hill) and Baodingshan (Precious Hill). Beishan is the earlier, from about 900 AD. It was initiated by the local commander in chief Wei Jinling. The sculptures at Baodingshan resulted from the efforts of a local monk, Zhao Zhifeng, who came back to Dazu around 1200 AD.

At both sites, massive areas of sculptures are cut into the cliffs and hillsides. Although most of the carvings are Buddhist in nature, they also contain elements of Taoism and Confucianism. (Writer’s note: Buddhism here is of Chinese version, and not the one, practiced in countries such as Thailand, Laos, Sri Lanka, Myanmar etc.) 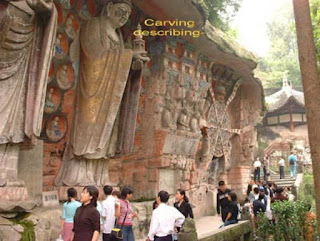 Many of the images depict scenes of every day’s life. They are lively and colorful. Carving at DazuOne of the most impressive figures is the 30 meter high Reclining Buddha entering the state of “Nirvana” (non-existence) with his disciples and relatives standing around him. The niche at Dabei Pavilion contains China’s largest carving of Thousand Armed Guanyin, the Goddess of Mercy.

All of the images are interesting. However, the most captivating ones are those of the “wheel of life”, where a huge giant has his arms around the Buddhist wheel, with Zhao Zhifeng, at its center. Buddha Teaching, Parental Kindness and the consequential debt owed by children to their parents, and other reliefs, depicting the Chinese version of the life of Bodhisattava, are true to life. The most gruesome of all are the carvings from “Eighteen Layers of Hell”, which show various stages of punishments for sinners. 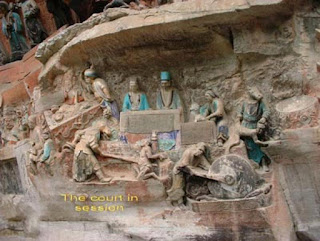 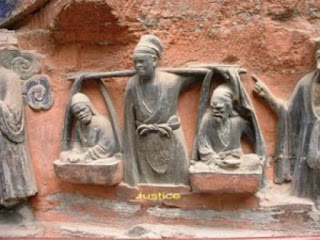 Although we had to walk quite a distance along the contour of the hills, we did not feel tired because the surroundings are lush and picturesque. The air was perfumed with the lovely fragrance of “Gui Hwa” or cassia (a kind of cinnamon). 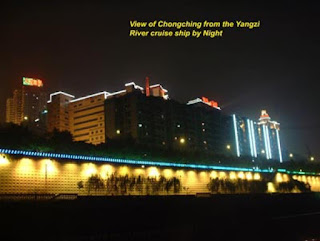 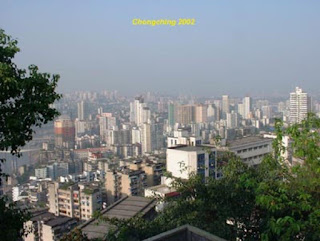 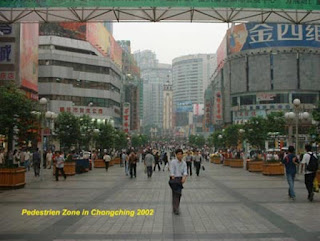 At 8.00 p.m. we boarded “Princess Jeannie” at the Chaotianmen Dock. I could not believe the changes that met my eyes. An illuminated embankment has View of Chongqing from the Yangtze River cruise at nightChonqing in 2002Pedestrian zone in ChongqingEnjoying Sichuan Hot Potreplaced the Chaotianmen of yore. Rickety and uneven steps, on which I stepped down to board the Victoria Cruise II four years ago, no longer exist. Neither does the bustling and noisy market, which used to be thronged with hawkers and vendors. Only a few porters remained to carry our luggage. 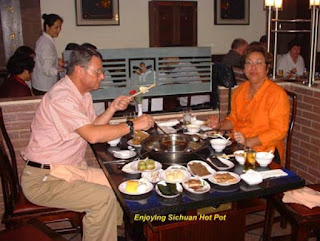 In fact, the whole city of Chongqing has changed. It has become much cleaner and more organized than four years ago. Oddly, I felt a pang of nostalgia for the bygone days. Chongqing has become like any other big city in China.

In the morning, we were woken up by the lovely sound of “the Butterfly Lovers” concerto. Sailing downstream towards Wuhan, we passed Fuling, a small town famous for its preserved vegetable tubers, which are sold all over China. In the afternoon we had a shore excursion to Fengdu “the ghost city”. 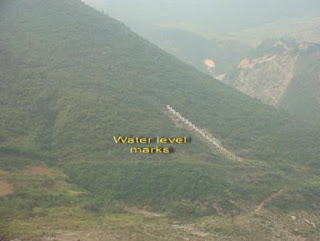 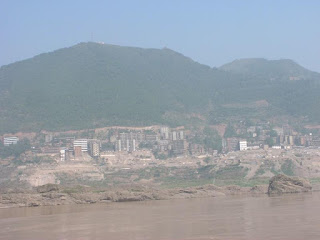 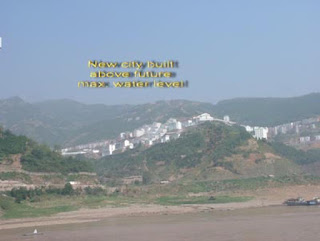 This year the old town, with its 54,582 people, will be flooded, leaving only the temple and pagoda of the God “Yama” to remind the next generation of the past. In the meantime, most of the people have already been relocated to new and better buildings in the new town across the river. 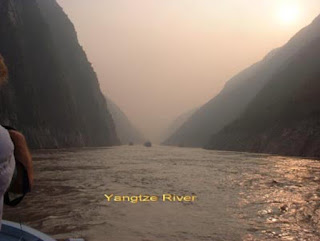 At dawn on the second day, we entered the Qutang Gorge at Kuimen Gate at dawn. Qutang Gorge at Kuimen GateAlthough it was foggy, we still could see an ancient script carved on the white cliffs of Mount Baiyan. Qutang is considered the most beautiful of the gorges, famous for its twelve peaks, the highest of which is the Goddess Peak. During the passage time, we listened to a commentary on the river and its legends, amidst the clicking and whirring of cameras. We also saw an ancient roadway carved into the rock, which used to serve as the only route for overland travel.

Later we were picked up by a ferryboat, and taken aboard the “Pea Pod Boats” for an excursion along the Shennong Stream to see the “Lesser Gorges”. 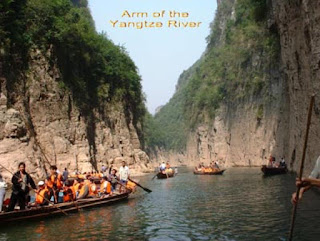 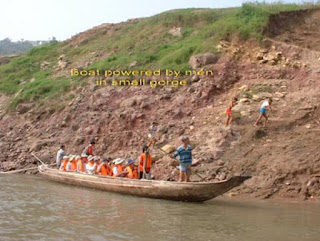 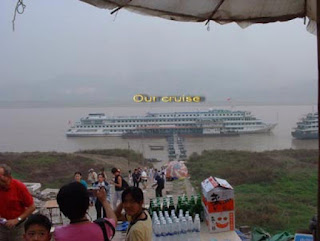 The most unusual sights here are the coffins of the Ba tribe, which are suspended half way up the cliffs. Since our local guide originated from the Ba tribe, she kept us amused with tribal stories. Some parts of the stream are so narrow and full of shoals that our boats had to be pulled by trackers who wore virtually nothing but a pair of shorts and sandals made of bamboo. Back on Princess Jeannie, we headed for Xiling Gorge, the longest of the three gorges.

After breakfast on the third day, we disembarked and took a tour around the Three Gorges Dam site, the largest hydroelectric project in the world. 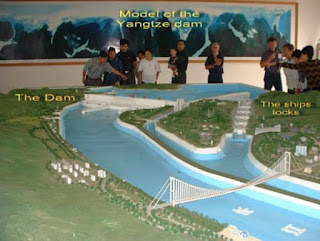 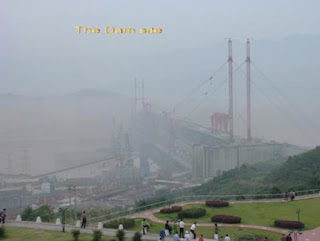 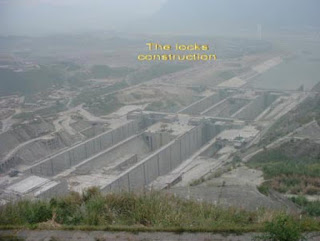 By 2009 Ships locks under construction at the Yangtze Damwhen the whole project is completed, Yichang will be the energy center of China. Eventually the entire area will be converted into a large holiday resort.

At around 10 a.m. the ship entered the Eastern Xiling Gorge. The passage time was about 40 minutes. Everybody lined the decks as we approached the locks to pass through the Gezhouba Dam on our way to Wuhan.

Later that afternoon, we were told that a cargo ship had sunk somewhere between us and Wuhan, blocking the passage in both directions. The English cruise director told us to pack our bags and leave the boat by 10.00 p.m. The German tour director protested, arguing that passengers should be allowed to spend another night on board and leave the boat the following morning. He pointed out the danger of traveling by bus in the middle of the night in foggy weather. At first the cruise director agreed to let us stay but then changed his tune, presumably the Chinese owners in Chongqing had rejected his decision. We felt we had been treated unfairly. Later we found out that there was a new group of passengers, waiting to board our ship at Yichang and the ship had to be cleaned for them. 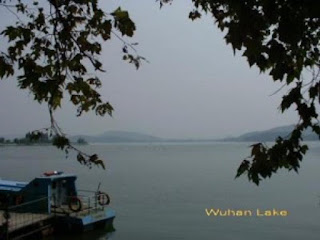 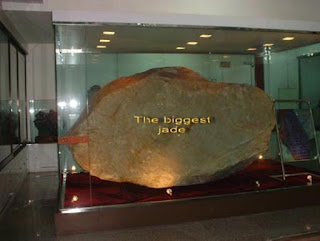 Finally, buses took us to Wuhan where we arrived at 3.30 a.m., bleary eyed, tired and frustrated. Until this unfortunate episode, our cruise had been both beautiful and relaxing, befitting a five-star floating hotel.