The Graceful Art of "Mulan Quan" 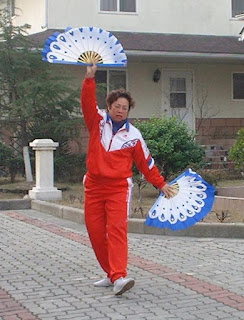 Pauline Haldemann describes her experiences with this form of martial art.

Before moving to Suzhou in 1998, we lived in Shanghai for fifteen months. When Walter and I arrived from Switzerland on January 16, 1997, we moved into Regent Tower in Hongqiao. The condominium overlooks a small park next door.

Standing by the window on the sixteenth floor, I would watch the activities that took place every morning in the park down below. The place was thronged with people of all ages, men and women. By 6.00 a.m., people started to arrive and the commotion began. After two weeks of quiet observation, I could no longer contain myself and decided to walk over and see if I could join them.

I took a casual stroll and looked around to see which group would appeal to me. Nobody took notice of my presence. Everyone was engrossed in whatever exercise they were doing. Besides, I could easily have been taken for a Chinese except for my height and my “out of place” attire.

Finally, I came upon a group of women who looked to be about my age. They were performing an exercise, which appeared to me to be a kind of martial art. Their movements were so graceful that I asked permission if I could join them. At that early stage, my “Putonghua” was limited to only “Ni Hao” and “Ni Hao Ma?” Thus, I did not discover until much later that the movement that I was trying to learn and practice every morning was called “Mulan Quan”. Later when we came to live in Suzhou, I had an instructor coming to the house every morning to give me private lessons for two long years!!

Mulan Quan is a form of martial art, mostly popular among women in China. It has also gained popularity in Japan, Thailand, Singapore, Macau, Hong Kong and, to some extent in France, Canada, Australia and America. The movement may seem gentle and graceful but it does not mean that it is easy to master or to learn for that matter. Much perseverance, memorizing and a certain degree of athletic skill are all required. The practice of Mulan Quan is said to cure several illnesses… such as backaches, pains in the joint, heart diseases, reduction of fatty tissues, sleeplessness and fatigue.

This form of martial art is based on the Chinese legendary heroine called “Hua Mulan”, who lived around 420 AD towards the end of the Dong (East) Jin Dynasty. During this period, life in ancient China was unstable because the North and the South were divided by fierce civil wars. Hua Mulan led a calm, quiet and an uncomplicated life in a little village, weaving silk and doing embroidery for a living. Because of her skill, honed to perfection, her product was well known and sought after. The humming of her machine could be heard on a daily basis throughout the village.

At that time, women were forbidden from formally studying arts or philosophy, or holding a high official position for that matter. However, since Hua Mulan’s father was a military officer, he secretly taught her “Kung Fu” which she mastered and enjoyed.

One day the machine stopped humming, and a total silence reigned over the village. The villagers were wondering what had happened to Hua Mulan, and went to her house to see what was wrong. Upon entering, they were amazed to find the girl slumped over her machine, crying bitter tears. She told them that her father had been summoned three times to the front line of the battle. Aware of her father’s age, Hua Mulan feared for his life and decided to take matters into her own hands. 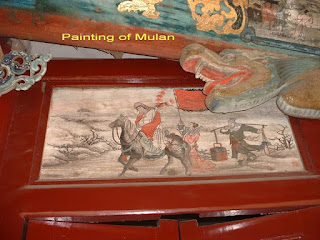 Disguising herself as a man, she reported to the army in her father’s place. Hua Mulan as a warrior on her horse She fought bravely alongside other soldiers for three long years and killed so many enemies that she won deep respect from her fellow soldiers. Because of her courage and bravery, she was promoted to the rank of “Jiao Wei”, a junior’s officer’s rank just below that of a major.

During one of the battles the general was killed and Hua Mulan took his place. According to legend, it was she who led the army in its final battle that ended the civil war. The Emperor wanted to reward her with honors and glory but Hua Mulan graciously declined. She only asked for a horse in order to return home to her father. Her wish was granted. It was when she took off her military uniform, that the people realized that she was a maiden and a very beautiful and clever one at that. 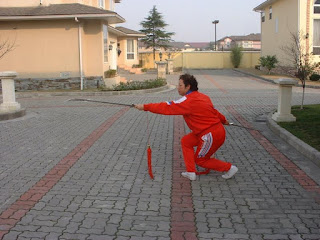 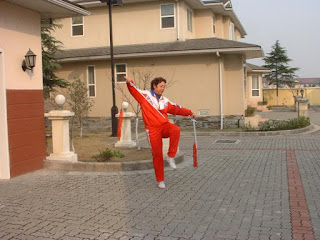 The present form of Mulan Quan was created and modified by Madam Ying Mei Feng and made known formally to the public in 1988. It was through her dedication and great efforts that she managed to bring about this “boxing” into being. Meanwhile, it has gained recognition from the Martial Arts Association as well as from abroad. 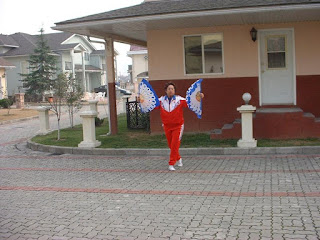 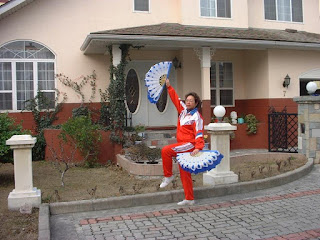 Its creator put taiji and qigong at its core, by combining beauty, grace and modern fitness together. The movements, which are accompanied by music, include bare hand, single fan, double fan, single sword and double sword, and near 300 action types. This “boxing” style uses inspiration and expiration of qigong as its practicing methods. A reasonable movement of both “yin” and “yang” forms its theoretical basis. While practicing, one feels a sense of well being, peace and harmony within oneself.

There are more than 60 Mulan Quan Associations in 20 provinces and cities throughout China, including one in Shanghai, which is presided over by Madam Ying Mei Feng herself. She has a training center where periodic training is given to enthusiasts at different levels. By doing this, she hopes to encourage her students to spread this graceful form of martial art to every corner of the country. Ying Mei Feng told this writer that there are approximately one million women who practice Mulan Quan in China – 100,000 in Shanghai alone.

Due to her love for her creation, Madam Ying Mei Feng recently developed a new single sword dance called “Guo Ja Jian”, by combining the single and double sword dance together. The accompanied music is very lively and it takes three minutes to complete the dance. I am proud to be counted among those enthusiasts who can perform this latest “Guo Ja Jian” on my own.