Of Snow and Ice 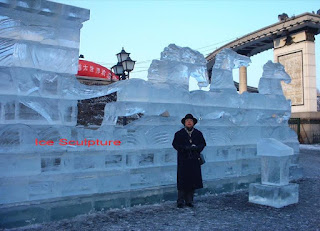 It was a pleasant surprise…one evening out of the blue, Walter placed two air tickets in front of me and announced airily, “We’re going to Harbin on Friday, January 11”. I was thrilled.

The car ride from Suzhou to Pudong new airport took almost as long as the flight to Harbin, which was two hours and forty minutes. The temperature was around minus 18 degree Celsius – not quite the Siberian winter we had expected! After checking in at the Shangril-La, we took a taxi downtown. We got off in front of the Gloria Inn Hotel and walked past a big square to the embankment. At the Flood Monument, in spite of the cold, cheerful pedestrians were out, enjoying the fresh cold air, wrapped up in their thick winter overcoats and hats. The Flood Monument was built to commemorate the flood that had devastated the area and claimed many lives in 1945. To our right, a railway bridge links both banks of the Songhua River.

From the embankment, a flight of stairs led to the frozen Songhua River. After paying RMB 5 each, we slid down an ice chute while sitting on a round matted straw seat. To take a photograph of me, sliding down the chute, Walter went down first. However, before he could even click the shutter, I had arrived at the bottom with hands and feet flaying in the air… much to the amusement and laughter of the onlookers.

I tried to get up with as much dignity as I could muster, but the ground was very slippery. A burly Chinese man, wearing a fur cap with flaps hanging down his ears, helped me up. With this good deed, he hoped to persuade us to go riding in his pony-drawn carriage. Since he was born and raised in Harbin, he felt he could show us something of his hometown. With my “passable” Putonghua, I haggled the fare down to RMB100 for a round trip across the Songhua River to the sandbank of Sun Island – where a snow sculpture competition is held every January at the Sino-Japanese Friendship Park.

After twenty minutes we arrived at the foot of the stairs, leading up to the street on which the park is located. We stopped at a small stall nearby to buy a pair of boots for Walter, as the sole from one of his boots got loose. Fortunately, a pair fit him. As a gift for not bargaining, he also received a pair of thick woolen socks. 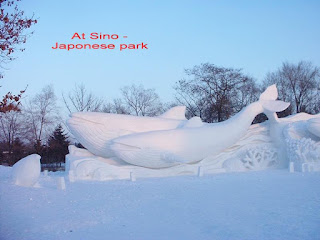 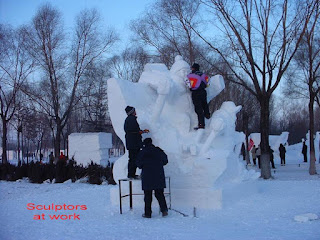 The competition area is large. Many sculptors from Japan, France, Italy – to name just a few countries, were seen at work. The finished sculptures display figures, buildings, fish, castles and many other images carved from snow. We spoke with a couple of sculptors from Romania who were still at work. They hoped to finish their project in time for the competition, which would take place within a couple of days. The park is a gathering scene of dedicated artists. 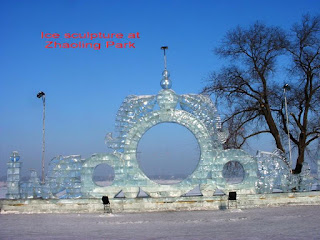 By the time we returned to the square next to the Gloria Plaza, it was getting dark. At this time of year, the sun gets down at around 4.00 p.m. The illumination is everywhere. We sauntered to Zhaolin Park, paid RMB 30 each and walked in. Snow and ice sculptures are wrapped around different colored lanterns to make pavilions, castles, bridges, dragons, temples and even the Great Wall glow at night. 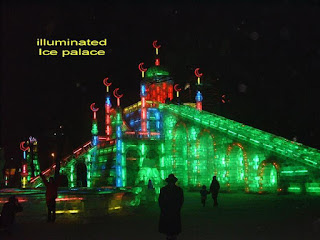 The Songhua River is fast flowing and does not contain a lot of silt, so when it freezes in winter, huge blocks of ice are sawn out to supply building materials for this art form. The ice is then transported to the various building sites, assembled and sprayed with water to meld the pieces together. The ice sculpture exhibition is held at Zhaolin Park every year. 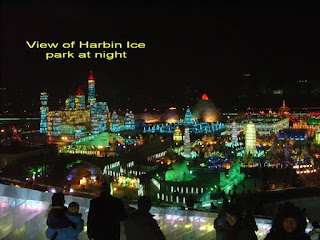 At the hotel, looking out from our fourteenth floor window, we could see across the Songhua River towards where the Third Ice and Snow World Festival of Harbin was taking place. It looked quite near but we realized later that it was much farther than we thought. So on the last evening of our stay, we hired a hotel limousine to take us there. 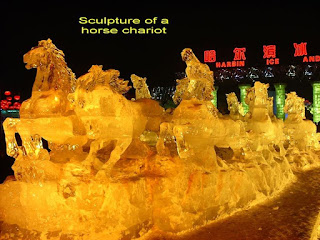 Since we did not encounter big crowds at Zhaolin Park, we were surprised to see so many cars and spectators at the Festival. The “Ice Carving Capital of the World” was ablaze in all its glory. The display of colorful lights was staggering…like a fairy tale. At the entrance was a scene from the terracotta army museum in Xia’n, with horses and carriages beautifully carved. Images from Disneyland dominated almost the entire area. Pavilions, dragons and palaces with corridors leading from one room to the other were luminous in the dark. We even spotted a Dutch windmill. A few young people were trying to scale an ice wall, while others climbed onto a stage to dance in tune to blaring music. We spent an hour, looking around and were glad that we went there quite early…by eight thirty, the whole festival area was enveloped in total darkness. 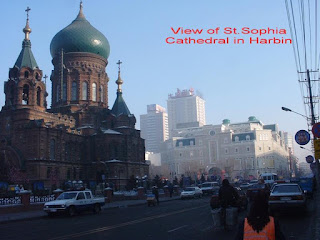 In my view, Harbin is a good place to visit during the Snow and Ice Festival, which is from January to March. Otherwise, the place does not have much to offer by way of sightseeing…unless you are interested in shopping, then try the Russian market. All the churches and cathedrals are partially closed and the orthodox St. Sophia Cathedral has been converted into a museum. Its frescos and paintings on the ceiling were destroyed during the Cultural Revolution. Instead, exhibitions are held inside the building three times per year. During our visit, there was an exhibition of black and white photographs, depicting the development of Harbin from a remote fishing village to a city… with the help of the Russians who discovered the place. 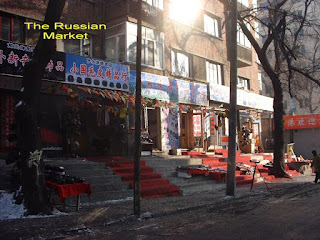 A number of Russian Jews moved to Manchuria immediately after the completion of the trans-Siberian railroad and following the pogrom in 1905. Later, after the Bolshevik Revolution in 1917, more than 10,000 emigrated to Harbin. As a result, you can see characteristic Russian architecture…in the form of onion shape domes, which still dominate the city’s skyline.