A Tale of Two Mountains

It was an invitation we could not refuse. The Swiss Club of Shanghai was organizing a long weekend stay at Huangshan. We were going to witness the signing ceremony between China and Switzerland. Both countries have agreed to designate Huangshan and Jungfrau as sister mountains.

While it is hard to imagine what the Yellow Mountain of Anhui and the Young Maiden of Berner Oberland have in common, a trip to Huangshan would be an opportunity to see this famous mountain as well as to be a part of a historical event.

Both Huangshan (located in the southern part of Anhui Province) and Jungfrau (located in Berner Oberland, Switzerland) were declared World Natural Heritage by UNESCO. In May, after some lengthy negotiations, the Chinese took the first step by visiting Switzerland. A delegation of twenty-three officials, headed by Mr. Xu Zhongling, the Governor of Anhui, were received by their Swiss counterparts at the highest peak of Jungfraujoch, widely known as “the top of Europe”.

In an event which received great public attention, an agreement was signed between Mr. Georg Krneta, President of Jungfrau Railway Holding Company, with Mrs. Elizabeth Zoelch, a member of the Bernese State Council on one side, and Mr. Hu Xue Fang, Director of Huangshan Administrative Office on the other side. In July, the Swiss reciprocated the visit to sign yet another agreement. Both parties are convinced that the sister-mountain relationship will form a solid foundation for the development of close ties between the two regions.

Since the former President of Switzerland, Mr. Adolf Ogi, was heading the Swiss delegation to Huangshan, we did not hesitate to accept the invitation. Before his resignation a year ago, Mr. Ogi served in the Swiss cabinet for thirteen years (during which time he was elected President twice). Mr.Ogi has always been this writer’s favorite cabinet minister.

Most of our fellow compatriots traveled by plane from Shanghai to Tunxi, while some went by train. We decided to go by car, since Walter had some business to attend to in Nanjing. From Nanjing we hoped to reach Tunxi within five hours at the most. However, as it turned out, the whole journey took six hours and a half due to road construction. On the return trip, it took us eight hours from Tunxi to Suzhou via Hangzhou.

As we arrived in Tunxi, a big red banner … “Welcome to the Swiss delegation”… was hung above the reception hall of the Huangshan International Hotel. While the delegates were enjoying their welcoming banquet at the invitation of the Anhui Provincial Government, we, the lesser mortals, were left to our own devices.

After breakfast the next morning, we traveled by a mini-bus to Huangshan. Thanks to a police escort, we quickly traveled the 94 km. At every crossroads, we saw policemen standing at attention, ready for a smart salute.

The landscape is lush and green, with dense bamboo forests. Virtually, every inch of the land is covered with fields of maize, intermingled with plots of various kinds of vegetables, especially the gourds whose yellow flowers were in full bloom. As far as our eyes could see, green paddy fields covered the terraced farmland. Judging from the lush green of the vegetation, I deduced that the land must be very fertile. It was difficult for Johnson, our English speaking guide, to understand why so much of the land in Switzerland is wasted in green meadows… just to feed the cows!! 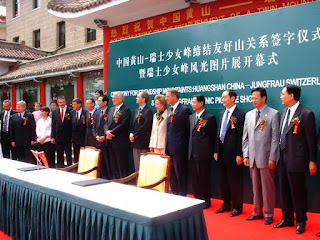 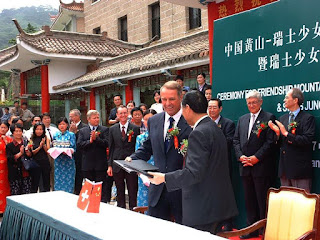 Although a long line of people were at the cable car station at the foot of the mountain, we were ushered directly into the VIP room and then on to the cable car that took us to the North Sea Hotel (Bei Hai).

At 10.30 a.m. in front of the hotel, as the official ceremonies began, the sun started to shine.The delegates from both sides, China and SwitzerlandFormer President of Switzerland Mr. Adolf Ogi with the Governor of the Anhui Province As expected, the delegates on both sides exchanged speeches. With the Swiss Ambassador present, Dr. Hans Roth, the Swiss Consul General of Shanghai and a major force in bringing about the negotiation – made a speech. The signing of the final agreement between Mr. Adolf Ogi and the Provincial Governor of Anhui Province, was followed by the video terminal inauguration, during which Mr.Ogi and the Governor sent their first email to Jungfrau. 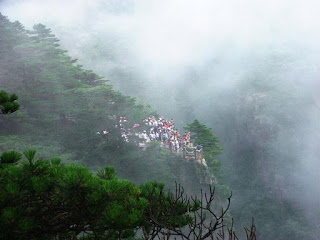 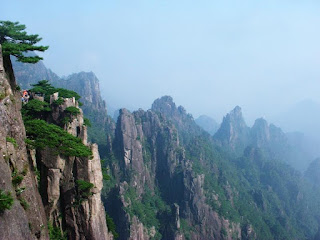 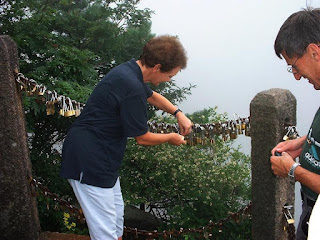 After a sumptuous buffet lunch, we walked to the scenic spots of the Lion Peak and the Xi Hai (West Sea),Huangshan Mountains with Lion PeakCrowds of curious onlookers even on steep slops Unveiling of heart-to-heart padlocksto enjoy the beautiful vistas. There, the heart-to-heart padlock was unveiled by one of the senior Swiss delegates. Wherever we went, crowds of curious onlookers followed, although the police had cordoned off the area. On the way back, we were invited into the “Dispelling Cloud Pavilion”, a few kilometers away from our hotel, for some refreshments. From the windows of the Pavilion, we had a lovely view of the whole range of the various mountain peaks. That evening, the Huangshan Administrative Office treated us to a beautiful banquet. We ended up toasting our hosts… as well as ourselves… with lots of “gan bei”. 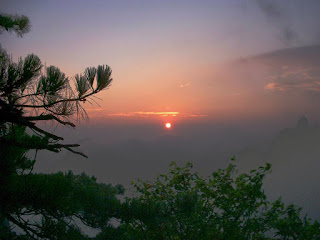 In spite of a rather late night, many enthusiasts got up to watch the sunrise from the Lion Peak. (‘Yours truly’ was too lazy to rise, having seen so many sunrises and sunsets at almost every corner of the globe.) At breakfast we heard a horror story…an unbidden guest broke into one room, obviously scavenging for food. The owner of the room woke up to find a pair of big red eyes staring at him; and its long tail wagging in the dimness of the light!

To reach Yu Ping Peak, we had to climb hundreds of steep steps…not recommended for the weak and the feeble.Yu Oing Peak Scenery with lush vegetationThe famous pine tree, the symbol of Huangshan MountainsMost of my fellow countrymen are keen mountain hikers, so they enjoyed (excuse the pun) every step of the way. The heat and the high humidity were almost unbearable, but we gritted our teeth and moved on with our clothes sticking to our backs. At this point, it was rather difficult to notice whether or not the scenery was beautiful or worth the effort, since I had to concentrate hard on just hiking. All I can remember was “Shi Xin” or “Beginning to Believe” Peak, was shrouded in drifting mists, just as in the traditional Chinese paintings of the area. Once at Yu Ping, we all took photographs in front of the famous pine tree, which is a symbol of Huangshan. Walter and I climbed onto a big boulder while we waited for lunch to be served. 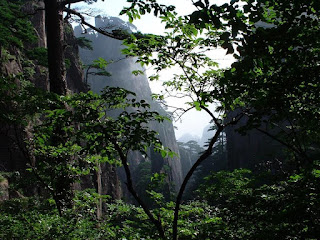 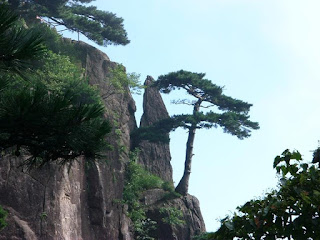 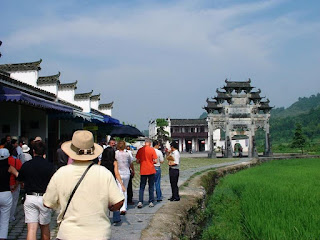 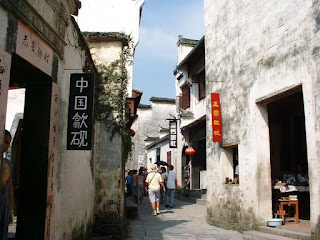 On the way back to Tunxi, we visited the ancient village of Xidi with its well-preserved 122 houses, built in the 18th and 19th centuries.Hu Wenguang Stone Archway Street in Xidi VillageThese clustered houses are in black, white and gray colors. Worthy of attention is the Hu Wenguang Stone Archway, a single-structured and four storied building supported by four pillars. This Ming Dynasty masterpiece is a testimony to the past prosperity of the village’s history.

That evening, the Huangshan Municipal Government hosted a lovely farewell banquet for us, with everyone dressed in his/her best attire. (And no sign of fatigue from the climbing.) Mr. R. Gullotti, Chairman of the Executive Board of Jungfrau Railways presented us with two first class tickets to the Jungfrau, while the Mayor of Tunxi gave us a gold-plated medal of the pine tree of Yu Ping.

Huangshan, the Yellow Mountain and the Jungfrau of Switzerland are both beautiful and significant areas. As to whether or not these two mountains are worthy of each other, only time will tell.