Many years had passed before Walter and I had a chance to revisit Kanchanaburi, a Thai provincial capital, about 140 kilometers north west of Bangkok. A lot has changed but the infamous “Bridge over the River Kwai” that forms part of the Death Railway still remains as the symbol of Japanese atrocities in the region.

The Death Railway became known throughout the world because of the Hollywood film “Bridge over the River Kwai”, starring a few big names of the 1960s. In one of the memorable and heart-rending scenes of the film was the Prisoners of War’s long march from camp to camp in their ragged uniforms. To keep their spirits up, the POW Allied Officers whistled cheerfully in rhythm with their marching footsteps.

However, the film producer did not do Thailand justice in that Sri Lanka or Ceylon had been chosen for the filming site although the River Kwai upon which the bridge was built, is located in Thailand.

After a two hours drive along the highway no. 4, passing through Nakorn Pathom, a small town that boasts of the largest and tallest pagoda or chedi in the whole kingdom, we arrived inEntrance to the War Cemetery in KanchanaburiThousands of soldiers are buried here Kanchanaburi. 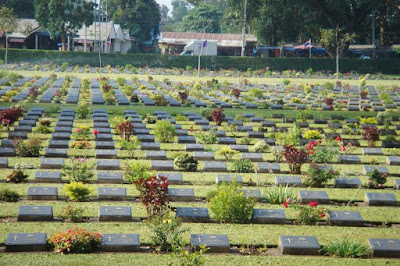 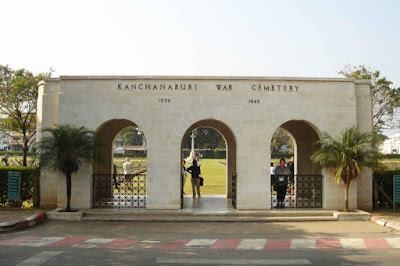 Our first stop was at the Don Rak War Cemetery with 6982 graves laid out in straight lines amidst the immaculately kept lawn and flowering shrubs. While some memorial stone slabs were inscribed with names, dates and regiments, the others state simply and touchingly, “A man who died for his country”. 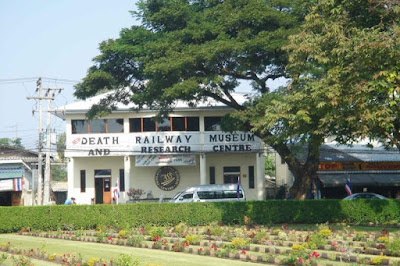 Unfortunately, no real effort had been made to document the plight of the conscripted Asian laborers who died while working on the The Death Railway MuseumDeath Railway. Their number was estimated to be around 100,000 – much higher than that of the Allies that was estimated to be around 16,000. In November 1990 a mass grave of Asians was discovered beneath a sugar cane field on the edge of town. Many of the skeletons were mutilated. Since then an appropriate burial service has been given to these poor souls.

On this trip we did not have time to stop at the JEATH War Museum but went straight to the River Kwai Bridge Railway Station. However, if you should go to Kanchanaburi, I would strongly recommend a stop at the War Museum that will introduce you to the local wartime history and gives you an insight into the gruesome conditions suffered by the POWs who worked on the railway line. JEATH is the acronym of the six countries involved – Japan, England, Australia, America, Thailand and Holland.

The best way to see the bridge is by taking a train. The two hours journey took us over the River Kwai Bridge on the Death Railway. Being Saturday, it was packed with passengers and some of us had to stand all the way to our destination at Wangpo. The train chugs and curves its way through the “Kwai Noi” valley that offers some of the most beautiful and lush scenery. At the approach of Wangpo, it slows to a crawl, as it has to squeeze through rock cuttings, dug at the cost of many POWs’ lives. At this point almost every man who worked on the railway died. It is said that for every sleeper that was laid out for the track, one man died as a result.

At Wangpo our coach was waiting to take us for a simple and “toned down” Thai lunch at “Pung Waan” restaurant belonging to one of the resorts at Kwai Yai.

Upon entering World War II, the Japanese began to look for an alternative supply route that would link their newly acquired territories that stretched from Singapore to the India-Burma border. In spite of the almost impenetrable terrain, the River Kwai Basin in Kanchanaburi was chosen for a new 415 km. Thailand-Burma Railway that would connect Thailand with Burma.

Construction work began in 1942 and 60,000 Allied POWs were shipped from the captured Southeast Asian countries. They were augmented later by another 200,000 conscripted Asian laborers. Rock was shifted and about fifteen kilometers of bridges were built with nothing more than shovels and picks, pulleys and dynamites.

When the line was completed fifteen months later, it earned more than its nickname of the Death Railway. So many people died as a result of the backbreaking eighteen-hour shifts as much as the dysentery-induced starvation because of the appalling living conditions. However, malaria and cholera were the biggest killers of them all.

One can also make the trip from Bangkok to Kanchanaburi by train. If you have a day or two to spare during your R&R in Bangkok, the trip to this provincial capital will be worth your while.

The town possesses a landscape of limestone hills and offers 0some lovely and scenic spots. There are numerous caves, waterfalls, temples and historical sites to explore. For golfers there are also a few beautiful championship golf courses. However, the main official attraction is the role it played during World War II.

The Bridge over the River Kwai will always remind everyone of the Japanese brutality that probably stemmed from the “samurai code” that considered imprisonment a disgrace. Japanese soldiers would rather consider “ritual suicide” an honorable option open to them than to be taken prisoners. Consequently, in their view the Allied POWs had forfeited their rights as human beings and as such deserved to be treated abominably and cruelly.

Should you have a chance to go to Bangkok, I hope you will make an effort to go and see the place for yourselves. Shopping is fun but learning about the past can be fun too.